My version of Chicken Provencal is based on the classic French dish and delivers the juiciest braised chicken bathed in the bold flavors of olives, tomatoes, shallots, herbs and wine. This is company-worthy comfort food but I don’t hesitate to make it just for us, either. Served with some crusty bread to sop up the sauce, a simple vegetable and a nice glass of wine it’s perfect for a Tuesday night in or a special occasion with friends!

I debated whether or not I could call this a braise because I don’t brown the chicken first. It’s probably nerdy that I’ve spent as much time as I have debating this in my head. But you know what? Cooking is therapeutic and relaxing and ultimately a creative expression. So I’m just going to go ahead and continue calling this a braise. I’ve never really been one for following the rules anyway.

And maybe you’re a rule-breaker, too 🙂

In my first post on braised short-ribs with ricotta gnocchi I explained that braising is the process of browning larger, tougher cuts of meat first and then cooking them low and slow partially covered in flavorful liquid. It’s truly my favorite way to cook because it fills your house with wonderful smells, gives the flavors time to develop and results in really juicy, fall-apart meat.

Braised Chicken Provencal will give you all of those things. Good smells, tons of flavor and the juiciest chicken PLUS a super easy bonus recipe for pasta using the leftovers (if there are any)! We’re just skipping the browning step.

First things first…have you ever spatchcocked a chicken?

Before you think I’m getting too personal let me explain what spatchcocking is (in case this is the first time you’ve heard the term). Spatchcocking is a way of preparing a chicken (or any poultry) by removing the backbone so that you can lay it flat in one piece to cook.

Well, there are LOTS of reasons and after you’ve done it once you’ll wonder why you haven’t done it before:

After you’ve done it once it’s a pretty quick process. Up until recently I just used my chefs knife for this but I finally decided to buy a pair of kitchen shears a few months ago. Woah, life changing. This is so much easier with kitchen shears and now I wonder why I waited so long to buy a pair! If you don’t have them put them on your wish list, mine were only $20 and I use them all the time now.

How to Spatchcock a chicken

You’ve just spatchcocked a chicken- how easy was that?!

Things I love but Eric hates

Why? Because I genuinely believed he would realize he likes olives if he Just. Ate. One. I sat across the dinner table from him and talked about how these olives were different and how a person’s taste changes every 7 years and finally if he just took one teeny tiny taste I wouldn’t ask him to try another olive for at least 7 more years.

I guess I crossed a line. He just wanted to enjoy his dinner without being guilted (or bullied?) into trying a food he knew he didn’t like. He loves this dinner -despite the olives- and is perfectly willing to pick them out and give them to me. I suppose I should be grateful for extra olives on my plate. But I pushed and he dug his heels in deeper and now I think he will most likely NEVER try an olive again and it’s my fault. But I learned something…

Eric is the second most stubborn person I know and I love him for it 🙂 (even if that means we’ll never enjoy an arugula salad with roasted beets, radishes and olives together)

Back to the recipe, let’s build some flavor!

Once you’ve prepped your chicken drizzle it with some of the olive oil, sprinkle it with some of the herbs de provence, a good amount of kosher salt and a few nice cranks of cracked pepper. Rub it all in and set your chicken aside. You can do this the day before (which is my preference if I plan ahead) and refrigerate your seasoned bird overnight. The extra time will allow the seasoning to get nice and deep into the meat which will result in a super flavorful bird.

Whether or not you’ve seasoned ahead make sure your chicken has been sitting at room temperature for an hour before you put it in the oven.

If you cook straight from the refrigerator the outside is going to get dry before the inside is completely cooked. This is a good tip to keep in mind any time you’ll be cooking meat.

For the rest of the ingredients:

Getting it ready for the oven

Now you’ll combine the tomatoes, shallots, olives, garlic and fennel (if using) with the remaining olive oil and herbs. Do this right in the same pan you’ll be cooking the chicken in. Push your veggies to the sides of the pan. Place your chicken in the middle and pour the wine and chicken broth over the veggies. Pop it in the oven. Soon you’ll be enjoying all of the wonderful braised chicken smells wafting through the house.

One last thing- you want to have a reliable meat thermometer available. I give times and temps in the recipe but variables like the size and starting temperature of your chicken and the accuracy of your oven make a difference in how long it will ultimately take. Take it out and check after an hour of cooking and don’t leave the oven door open while you’re checking. Or, better yet, get an in-oven meat thermometer. You’ll take it out when the thickest part of the thigh (not touching the bone) registers 165 degrees f. Let it rest on a carving board, tented with foil, for 15 minutes before carving. The temperature will continue to increase (to 170) while it stands and the juices will have time to flow back into the meat. Please don’t skip this part and you’ll be rewarded with beautifully cooked, perfectly juicy chicken!

If you don’t eat this all the first night, the leftovers make a fantastic pasta.

I hope you enjoy this Braised Chicken Provencal as much as we do!

And if you make it I’d love to see how it turns out! Tag #breathingandcooking on Instagram or facebook with a picture!

First you want to spatchcock your chicken (step by step photos are in notes). Using kitchen shears or a good knife remove the backbone by turning chicken breast side down on a cutting board and slicing along each side of the backbone to remove it. Make a small snip at the top of the chicken where the breast bones connect. Flip the chicken over and, using the heel of your hand, press between the breasts to flatten the bird. I like to snip off the wing tips as well.

(Save the backbone and wingtips in a freezer bag for stock!) 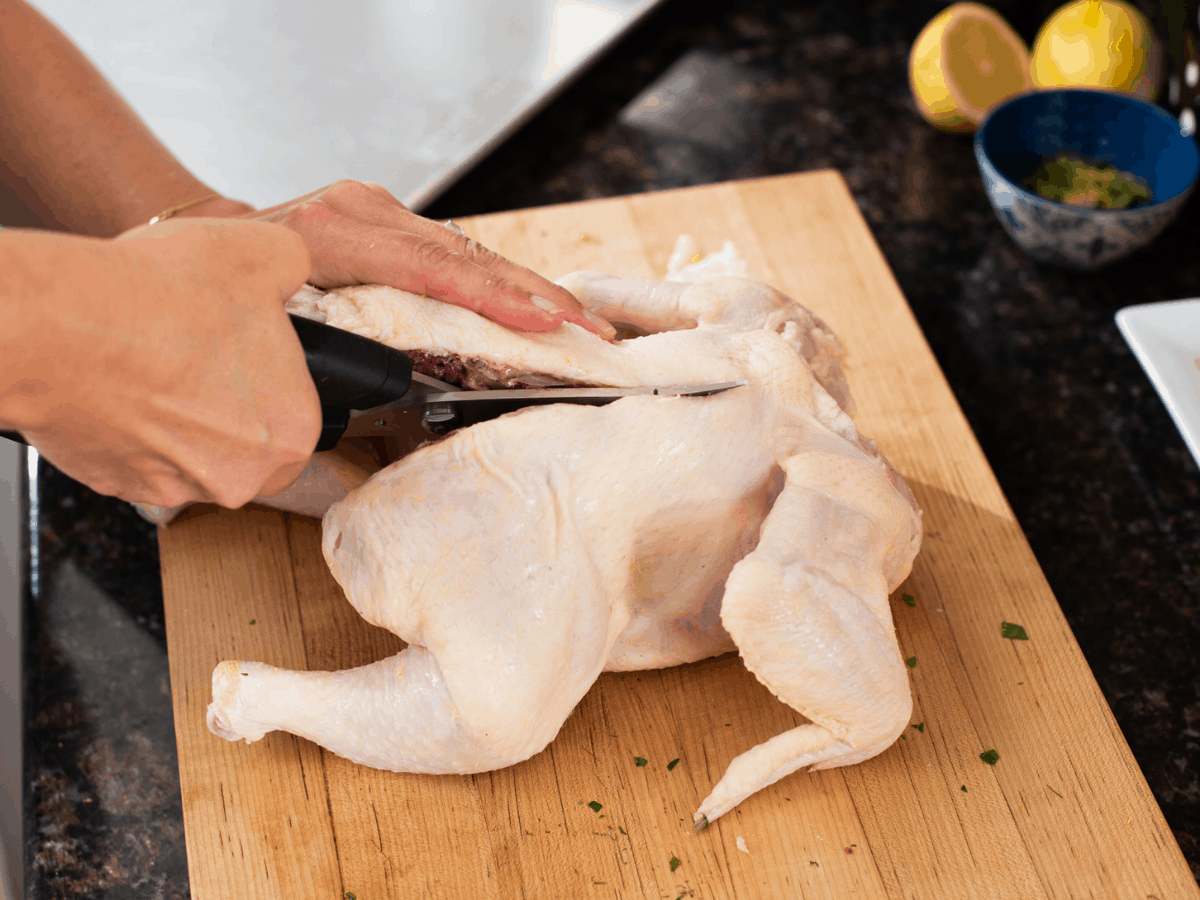 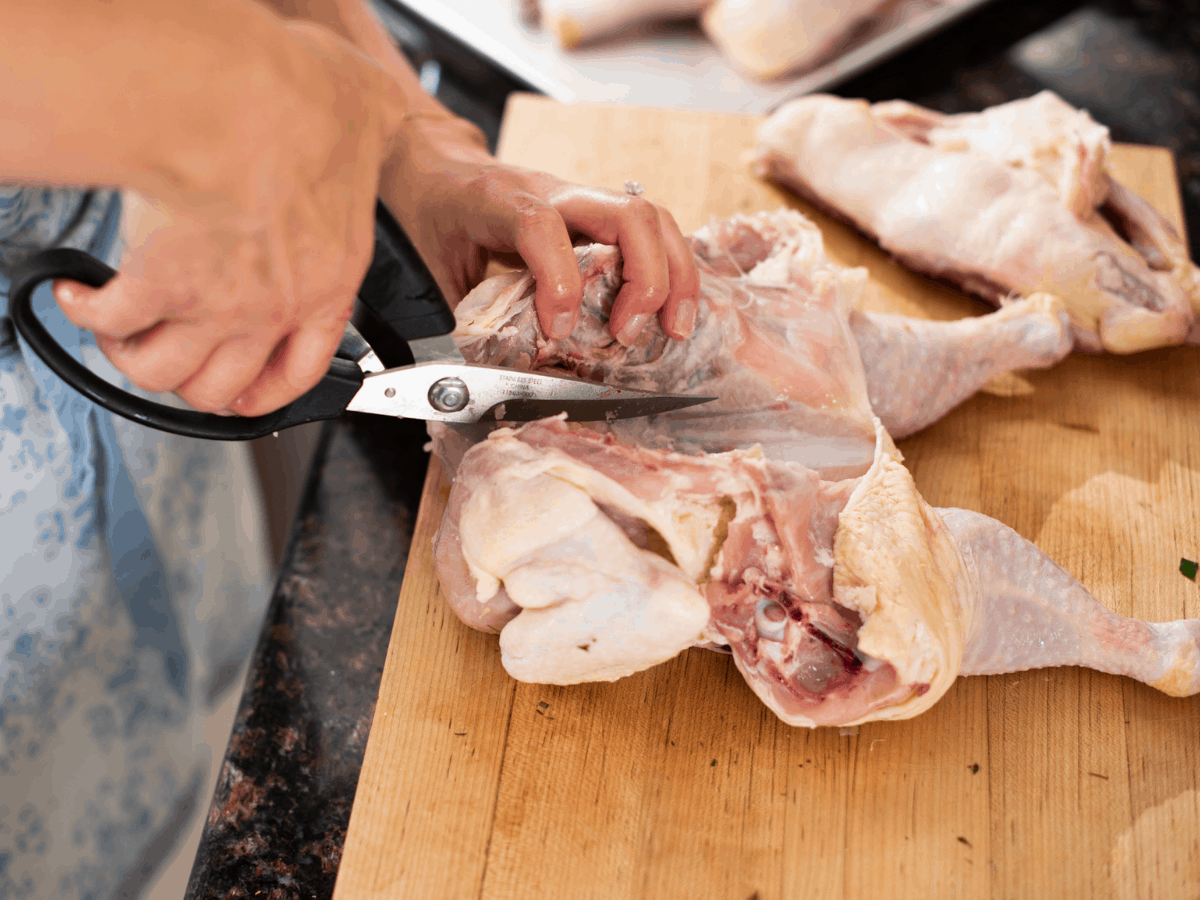 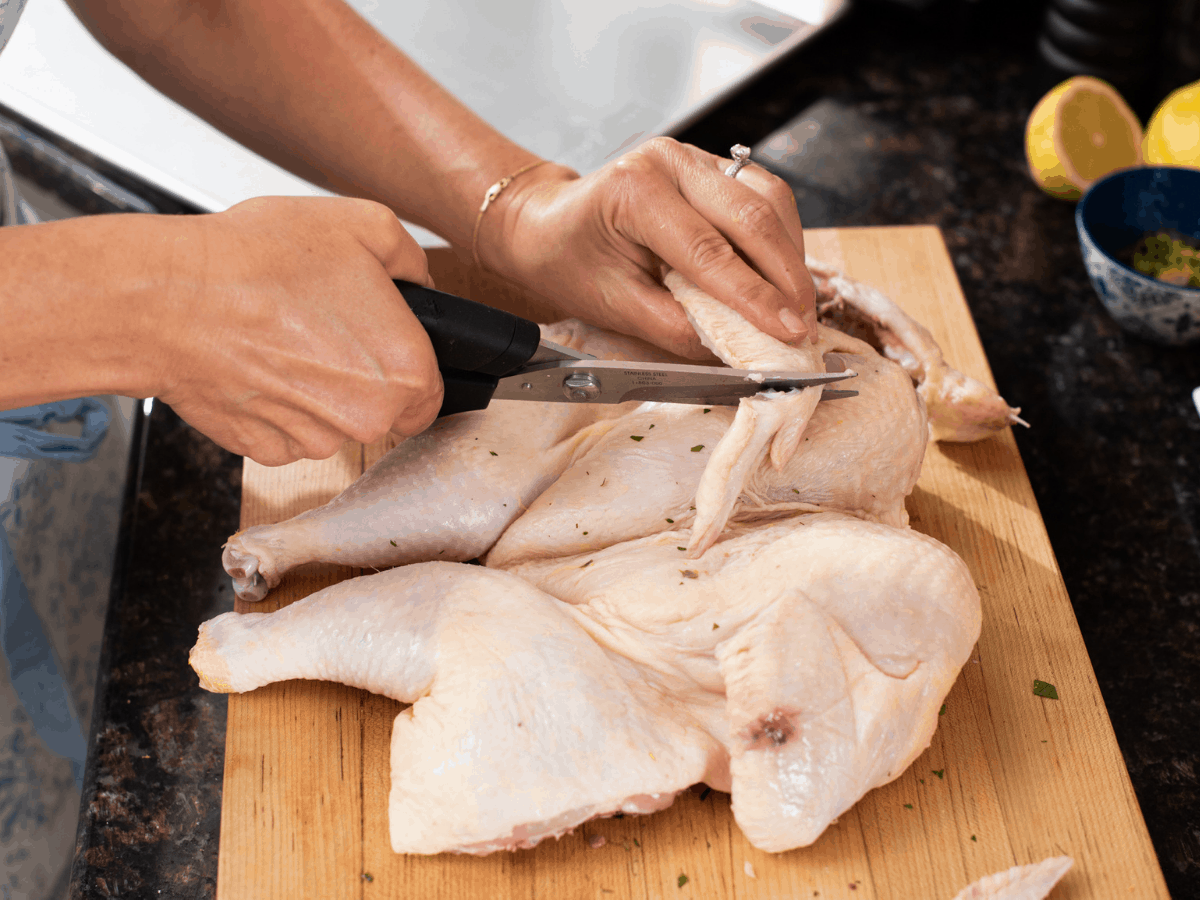 You've spatchcocked a chicken! Make sure to save the parts you removed in a bag in your freezer to make stock!

What are you craving?

Welcome to Breathing and Cooking, where slowing down and enjoying the process is as important as creating delicious, seasonal food to nourish your body and your soul. I'm Erin, the home-cook, writer and photographer behind B&C. I'm looking forward to sharing my love of family, food and life with you! Wondering what breathing has to do with cooking?

Let’s slow down, breath and enjoy the process together

Looking for something specific?

Follow me on Instagram to see what’s happening in real time and tag me @breathingandcooking with your own kitchen therapy!

I’ve been traveling and just realized, as I sit

The transition from summer to fall is is one of my

I haven’t made mussels in ages but saw these bea

If one food symbolizes summer cookouts for me, I'd

“I don’t know what you put on this chicken but

You know how they say you eat with your eyes first

Our big weekly dinners have been a little smaller

Have you noticed that the peaches this summer seem

A big thank you to @rootsupnorth for sharing the r

I learned about @fairviewmeadowfarm this past spri

The beauty of eating fresh vegetables in season is

I’m just going to file this under “Things That